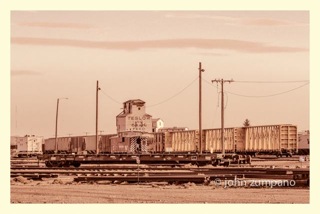 In June of 1932 my father graduated from  high school.  He had grown up in the little town of Casey, Iowa, where his parents worked a small farm.

The Great Depression was hard on the land there, and money was tight, so when a pupil had the basic skills, they were handed a diploma and wished

He and a friend wanted to celebrate this passage, so they decided to take a trip.  In America, adventure is to the West, and so they hopped a freight

train.  They each had purchased a WW I Army greatcoat, a long, heavy woolen garment that served as tent, sleeping bag, and backpack, and the

pockets were stuffed with sandwiches made by their mothers.

They rode and rode and rode, unable to sit down or to sleep, until the train stopped in a big railyard one night.  They had to get down, walk the kinks

out, find something to eat.  The lights of a town burned near, they walked toward it, staggering a little.  They crossed a busy street, walked through

a neighborhood of small bungalows.  The air was thick with the scent of blooming lilacs. The night was cool and promised cold.

A man called out from his porch, asked if they were on the road.  Yessir, they said, and he offered them the porch for the night.  In the morning the

man’s wife cooked them a big breakfast, and they walked on.  They came to a fast-flowing river, saw mountains rearing up, for the first time in their 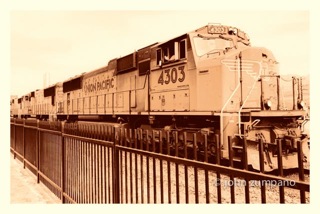 They were in Livingston, Montana, where I live now.  They found work on ranches nearby, haying, laboring, and after a few weeks they headed back

My father had seen the West, though, and he loved it.

Poor as his family was, poor as the farmers were in the Great Depression, the teachers my father had told him he could find another life, one freer and

more interesting. If he got a good education. My father knew he would.  But he had no money, so he planned to join the United States Navy as soon as

he could. and save most of his pay.  But he had to be eighteen, and that was a couple of years away. Work was hard to come by, but there was some, if

My father was Welsh, built like a fireplug, and he had been a champion wrestler. So he found work in a carnival, wrestling all comers who wanted

the twenty-dollar prize.  He wasn’t terribly big, but he was immensely strong, and he knew the properties of olive oil.

The carnival was owned and run by a man called Ten-Cent Jack, and such a carnival in those days usually had a mangy lion, a patched tent, games

of chance that weren’t all that chancy, and a passel of dancing girls who of course were also whores.  The carnival would pull up to a grove of trees

near to a couple of small towns, a site recommended by local Lawn Forcement (fee negotiable), and open for business by evening.

It was a time-sensitive business, in that the carnival could stay until the local pecksniffs got wind of it and the People of Decency provided fell

shrieks which reached the ears of Lawn Forcement. Forty-eight hours was about usual.

Dad rassled in season, and did this and that–I heard mention of “the railroad” but no more, and in time he was old enough for the United States

I was and am very proud of my old man and his time spent working for Ten-Cent Jack, and that early professional experience was to have some

effects for the rest of his life. And those effects, upon my mother and her father, most signally, are for another post…….

“Montana always shimmered in my mind,”an old cowboy told me,”we was all tryin’ to get here…”and he had, on a cattle drive, in 1884.

He was one of the old cowboys who sat most days at a big round table at the front of the Oaks bar in Bozeman.  There were half a dozen of them,

That was a long time ago, when I was a kid peddling newspapers in Bozeman, Montana. In 1957. there were men in their 80’s and 90’s who

had been there since the beginning.

How I ended up in Bozeman, Montana, like anyone’s life, was the sum of a series of small events, which somehow got linked.  The odds were incredibly high,

like they are in anyone’s life, that his would happen, but, then, it did.

Now I can look back on the markers in the arc of my life before I had one.

My father’s splendid athleticism, my mother and the Dust Bowl, water, the books of Thomas Wolfe, the Great Depression, a cuckoo clock, the attack

by the Japanese on Pearl Harbor, and a character called Ten-Cent Jack, who owned and captained a small and fast-moving carnival that toured the

Midwest and the Upper South.

Any child’s odds of being born at all are about twenty-five million to one for openers, so, it is hard to find a plan in there.

Now I live in Livingston, with about seven thousand other people, and from my window I can see Sheep Mountain, a scarp marking where the land

was when the Yellowstone River began to flow about ten million years ago.  The river carved and chewed its valley, and if I squint right I can see ghost rivers

writhing in the air.  South of me The Dragon sleeps, the largest volcano ever known to exist. The three vents, the holes, are larger than the state of

Delaware.  When it last blew, it dumped twelve feet of ash, in Maine.

Some a little too good to tell, I would expect…… 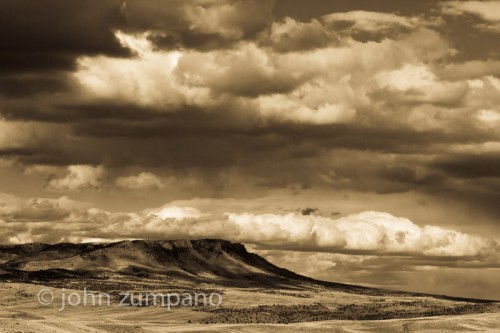