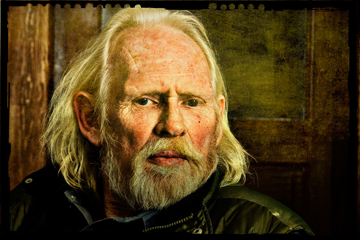 Cowboy, hunting and fishing guide, folksinger, poet, essayist, and novelist, Peter Bowen has written the picaresque Yellowstone Kelly historical novels, and humor columns and essays on blood sports as Coyote Jack.He has also written the Gabriel Du Pré mysteries, in part because “the Métis are a great people, a wonderful people, and not many Americans know anything about them.”   [Bio]

Gabriel Du Pré, the old Métis fiddler at the center of Peter Bowen's atmospheric, engrossing series set in the dirty, dusty Montana that's rarely featured in travel brochures, has a knack for finding trouble. Or rather, trouble has a knack for finding him.
Visit the books in this series.
All thirteen available now as eBooks.
Luther Sage “Yellowstone” Kelly is a fictionalized rendering of an historical figure of the late-nineteenth and early-twentieth century. The books in this series chronicle Kelly’s reluctant involvement in historical events as geographically disparate as Colonel Nelson Miles’ campaign against the Nez Percé and the Boer War.
View the books in this series.
Praise for The Gabriel Du Pré Mysteries:

“Peter Bowen does for Montana what Tony Hillerman does for New Mexico. Anyone who has not read a Gabriel Du Pré mystery is missing out on something special.” — Midwest Book Review

“Bowen is also an accomplished poet and folksinger. It shows. His Montana mysteries flow with sublime musical dialogue. A fine series that deserves a larger following.” — Booklist (Starred Review)