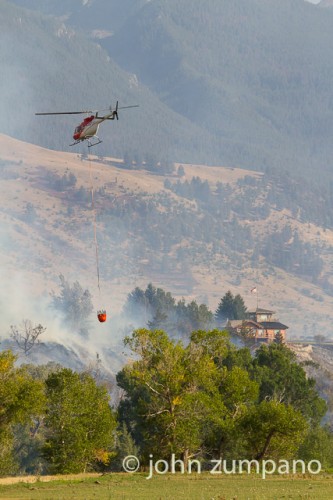 Last summer was the most wretched I recall here in Montana, and my memory goes back to the Fifties.  No rain, and unusual heat–over 90 more days than not–and a fug of smoke that made everyone hoarse and peevish. Well over a million acres of forest and grassland burned here, well over a million and a half in Idaho, and we get their smoke. Singers couldn’t sing, drivers cursed other drivers more than usual, and down the Paradise Valley a fire began when the bucket on a little Bobcat front-end and backhoe machine struck a spark when it hit a rock.  When it is this dry a horse’s shoe can ignite the grass, or the sun shining through a bottle.                                                                 The fire roared up Pine Creek, and took four houses.  Many others were saved by the rural firefighters, and the people who lived on the east side of the valley nearest the blaze were forced to leave their homes, often with only a few minutes warning. No lives were lost, but there was a lot of sorrow for lost forests and houses and the priceless things people accumulate in a lifetime.  After the fire was spent people got a bit more aggressive about keeping burnable materials a good distance from their houses, some of which were built in dense forests, which is a bit like having your home on a bonfire, already laid and ready. Montana is very dry at best, and would be a desert if it were not for the mountains and the winter, which accumulates water when it is cold and releases water when it warms up.  And it is warming up. Our forests are in bad shape for a number or reasons which I won’t bother with here–the political fights–but more importantly the warming climate allows pine bark beetles to have two reproductive cycles in a year rather than one.  So the trees they favor are dying, their vascular systems cut by the tunneling insects. The forests in the mountains now have a red blush which is getting more visible day by day–conifers dying, standing, dry, their needles filled with combustible chemicals.  It won’t take much. Last summer wildfires tore through some suburbs of Colorado Springs, Colorado, and looking at the films I had to wonder why anyone would be foolish enough to build where they had, in the foothills of the high mountains–good for up and down drafts–and why they had tree species in plantings that actually need fire to live.                                                                                                                      The Paradise Valley has more people in it than I like, which matters not a whit, but in other areas near larger towns like Bozeman people have built homes back in the trees, which unfortunately are lodgepole pine, which has to burn to seed.  Lodgepole lives about a hundred years before dying of old age, and though many people know of the terrible fires of 1910 which burned northern Idaho and western Montana, fewer know that in 1911 much of the forest over here, in south-central Montana, burned. Of course the lodgepole loved that and came right up, and, well, you do the math.  The people who have built back in those forests are independent cusses and they have narrow little roads, dirt, and overhead power lines, and when the fire comes they won’t be able to get out and they won’t have any electricity to pump water on their homes with. Which may not matter, since they will likely all die. Zoning and building codes for many of Montana’s people is Tyrannous Guvverment Intrusinations and they howl they will defend their sacred liberties with their God-Given Constitutional Guns. Mostly gas, but it does tend to discourage sensible public policies on all sorts of matters.And it is hard to find building inspectors who want to go in there and make useful suggestions. God, I love this place and the people in it.  Most of them anyway. We all make our lives up, pretty much, and Montanans have wonderful fantasies in the matter of How Things Ought to Be. (Don’t get me started on cowboys.)                                                                                    But it has rained and rained and rained this year, so, not so many worries, but there are other years coming which may not be so nice…..